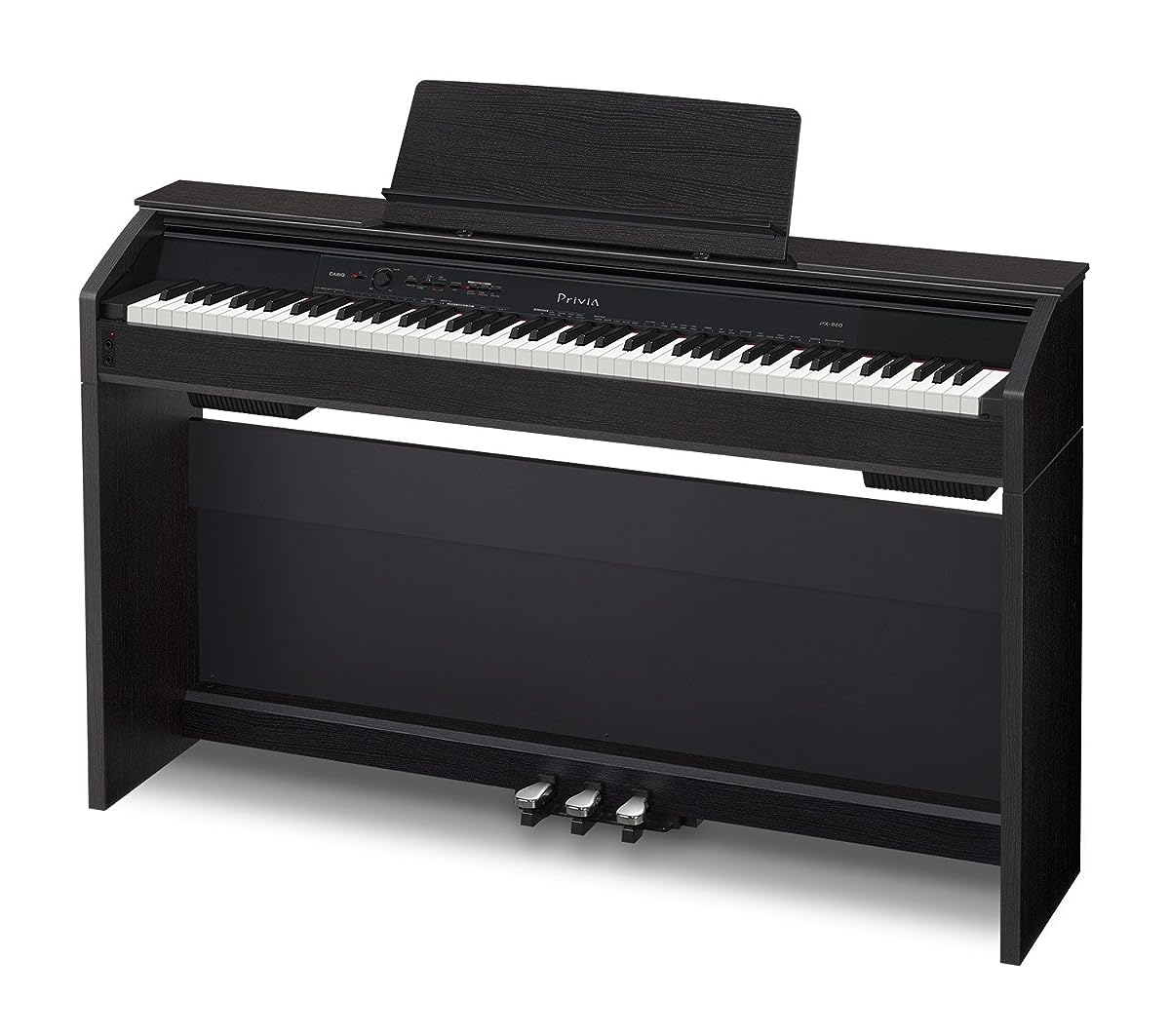 The Casio PX 860 Digital Piano delivers impressive quality of sound with completely realistic feel and look in the form of a sleek cabinet style piano.

While digital pianos come in a range of styles and with an even higher diversity of features, there are some specific ones that a professional pianist needs when he/she heads onto the stage for a performance or a competition. Such features include a broad range of voices to practice with, the ability to use the “hood” to achieve improved sound effects and above all, obtain an experience that is as close to playing on a grand piano as possible. To be honest, these features have been there in keyboards for a long time, but the price tag attached to them often meant that only the highly reputed pianists could afford them. Casio appears to have set out to change this situation by offering these and a host of other features on the Casio PX 860 Privia Digital Piano for a fraction of the price demanded by the competition. In our experience, Casio managed to tick all the boxes in the PX850 except where some wooden parts were concerned eg. the piano base, and improved on the overall design and features in the PX860. So now do the pros balance out the cons and make the PX860 unit a member of our list of best digital pianos in 2015. Let’s find out through a detailed review!

Note: Since the PX850 is the older model and the PX860 is the newer model, all features of the PX850 would be present in the PX860 unless otherwise specified. Differences between the two units have been highlighted at appropriate places.

Set up and Build Quality

Being a professional pianist’s unit, the Casio PX 860 comes with a stand that the lower priced models like the Casio PX150 lack. Furthermore, the stand is made of premium quality wood and this, coupled with the hood and the piano body itself, make the unit rather heavy. Our study of the user manual informed us that Casio recommends that two people carry the unit at any one point of time. While some users found that they could achieve the task on their own, we discovered that it is always safe to have a second person available even if you’re capable of carrying the unit under normal circumstances.

For all its weight, the unit is surprisingly light and this allows it to fit into even small apartments. Further, it has been treated with insect-resistant chemicals that would make disinfection and regular cleaning of the digital piano unnecessary. Equally convenient is the setup. The piano is divided into 3 parts labelled A, B and C. If you keep the bolts on the C part towards the wall while assembling the unit, the entire procedure should prove to be simple and achievable by one person within a reasonable span of time.

Coming to the build quality, we mentioned in the introduction that the unit was criticized by some for having a “wiggly” baseboard. However, users who’d had the product for years found that the baseboard caused virtually no problems. Aside from the baseboard, furthermore, there were precious few negative comments about any other part of the product. Rather, users were almost unanimous that the use of premium quality wood made the unit a delight to use and own.

Given that the traditional grand piano is always made with wood, we could not resist the allure of playing on a true wooden unit. Beyond beautiful looks, the piano comes with keys that resemble ivory to the greatest extent possible. In other words, they are textured and provide a somewhat weighty feel that allows users to mimic the experience of playing on a real grand piano.

As you’d expect of a premium contender for a place in our best Casio digital piano reviews list, the keys are hammer-weighted and interestingly, have a slight weight gradient that brings users even closer to the authentic experience of playing a traditional piano. If that weren’t enough, the combination of weight and texture prevent slippage of fingers and this in turn, helps professional trainers aid amateurs with effective digital piano practice.

Our first impressions regarding the foot pedals weren’t so unequivocally positive. We – and many other users – found the pedal to be extremely easy to use. While this may not be an issue for those who simply wish to play the digital piano, we did find that on moving to the grand piano the difficulty of maintaining the sustain pedal occasionally took us off rhythm. Of course, the pedal can be changed for a better model from Casio at any time.

Lastly, the music stand (for holding the sheet music) cannot be adjusted. However, since the stand itself is quite close, this proved to be an issue only for a very few users.

Casio advertises that it has improved the sound engine of the PX series substantially while moving from the PX850 to the PX860 and this is evident because, as most users aver, sound quality is immaculate. The product comes with digital recordings of virtually all the prime instruments made by Casio and this allows users to enjoy everything from the grand piano to an orchestra playback. While professionals found that they could obtain greater range of sounds by paying for the substantially costlier Yamaha Arius YDP-181, they were so satisfied with the sound that none bothered to go for the pricey instrument.

We would add to this general viewpoint our own opinion that the use of a hood adds a degree of versatility to the sound that manages to approach that of the grand piano when played in small rooms. Indeed, many folks we’d talked to asserted that what they’d thought to be a sales gimmick in the beginning was really a part of the great musical experience that is the Casio PX860.

Sound production by the speakers too is surprisingly good. Users had no trouble obtaining fine tunes without the need for additional headphones. Further, they discovered that you can change the volume of the speakers to your liking to an extent not allowed in lower-end models.

Speaking of acoustic features, it is interesting to see that Casio has provided not only a host of piano “voices” but those of orchestras, harpsichord and a range of other instruments. While users could not replace practice with such recordings for the practice with real team members playing different instruments, they did find it easy to prepare themselves prior to practice sessions with other members.

Being a performer’s and not a composer’s piano, controls have been kept to a minimum so as to allow users to modify the settings on the fly while performing on stage/competitions. Indeed, the change from the PX850 to the PX860 is to a large extent the simplification of controls. Essentially composed of a single dial and a few buttons, these controls however allow the user to access a huge range of voices, modify playing and playback properties and decide the volume of the speakers to an extent that would be envy of the professional composer.

Finally, we find standard connectivity features like USB and headphone jack. The USB port supports most of the products that are meant to accompany the piano, ranging from special smartphone apps to accessorial musical instruments.

While we’d love to say that the Casio PX 860 has a flawless physical construction, it is impossible to deny that users have had problems with the baseboard. However, given that the overall build quality is excellent and further, this is combined with quality sound production, a good set of speakers and adequate voices, the problems with the baseboard appear minor. Indeed, such is the combination of features that users have chosen to ignore the negative features and – like us – rate the PX850 and to an even greater extent the PX860 – as harbingers of a type of affordable yet premium digital pianos for the performers/competitors of today.