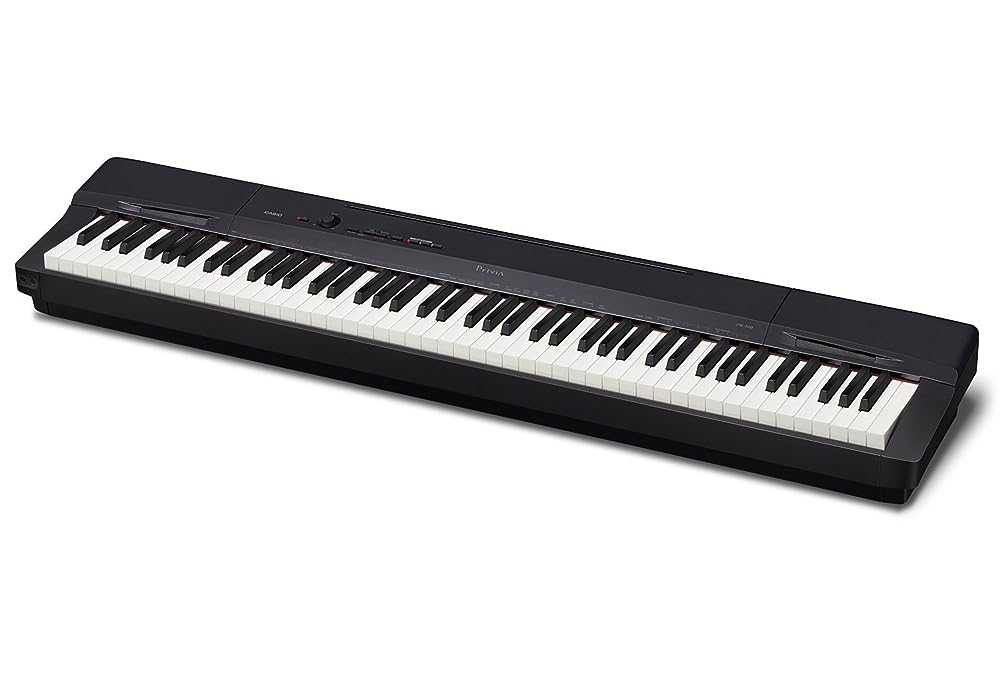 The Casio PX160 adds a range of acoustic and functional benefits to the acclaimed PX150’s list of features. It surpasses most competitors in terms of both the music and the price range.

While it is difficult to come up with a masterpiece like the Casio Privia PX150, it is even harder to achieve the feat twice by producing a product that significantly improves upon its predecessor without pushing up the price significantly. Casio claims to have done just that by including enhanced speakers, weighted keys, auto shut-off, MIDI recording and a range of other useful features in the Casio Privia PX160.

If that weren’t enough, the company has even expanded the color options so those with an eye for aesthetics can go for the gold edition instead of the black one. Colors aside, is the PX160 an improvement in all areas compared to the PX150 and even similar Yamaha competitors? In our experience, most of what Casio claims is true. However, given the success of the PX150 and the stiff competition from Yamaha, this is hardly possible and so even the PX160 has some flaws. So is the product a worthwhile advance on Casio’s already large and popular digital keyboard line-up? Let’s find out through a detailed review!

Set Up and Build Quality

As we’d mentioned while talking about the important questions to ask oneself before buying a digital piano, the size and accessories of a digital piano would decide whether it is a good fit for your apartment or not. Interestingly, the Casio Privia PX160 proves to be compact enough to fit into even a small apartment with ease. Though we found it to be somewhat heavier than the PX150, it could be set up by a single person and the most basic of home improvement tools.

Speaking of set up, the main piano unit comes pre-assembled and weighs just 25.5lbs. Casio simply requires you to attach it to the stand, connect the music sheet holder and plug in the power cord. While some bundles do offer a stand as part of the piano package, many users preferred to build simple stands if they did not/could not use a table – as we did – for the purpose. A few even argued that once they’d positioned it correctly, even their children could carry out the set up within minutes.

Coming to the build quality, we find that the minimalistic design has helped eliminate any protrusions that may cause damage to the unit due to rough handling. The exterior is sturdy and while it may not be up to excessive movement, it can handle a fair amount of occasional transportation.

Where the unit truly differs from the PX150 is in its having fully weighted keys. While the PX150 had keys that approached weighted keys, the PX160’s keys feel heavy, resistant and conducive to efficient piano practice as shown in our infographic. Many folks found that they could hear a distinct “thud” when using the keys and in the opinion of a good number, this was reminiscent of the action of a real grand piano. One user noted that the action of the weighted keys was similar to what the best Yamaha models offered and in this sense, allowed users of Yamaha products to upgrade to this Casio unit with ease.

Coming to the connectors, we found that some users fretted over whether an L-shaped connector would fit the port meant for the sustain pedal. In our experience, the angle at which the port has been situated makes it easy to connect wires of any disposition without there being any fear of bending. Further, such connections do not require the user to move the unit away from a wall.

Lastly, there is a standard music sheet stand available. Since the product does not have a ton of controls, the stand is placed at a reasonable distance and in our practice sessions, quick reading of the notes was never an issue.

Courtesy of one inquisitive user, we now know that the Casio Privia PX160 has been meticulously programmed using music from one of Casio’s popular grand pianos. Indeed, many users found the sounds to be very “bright” and in being so, capable of training people for playing a real grand piano.

Furthermore, we found that Casio’s inclusion of an interesting new concept called Acoustic and Intelligence Resonator had yielded great dividends for the sound quality. In fact, this feature allows users to achieve sound combinations that would otherwise be difficult to achieve in small rooms or in situations where one is playing alone.

Considering the fact that this product is meant to provide an authentic traditional piano experience, it is interesting to see that the company has maintained an adequate number of voices. While not every voice is equally impressive, the piano ones are definitely worth trying out even if one has access to superior traditional pianos. That said, we did find the harpsichord sound to be somewhat below our expectations and surprisingly, we found ourselves in agreement with a good many other users.

Reverb and chorus are available for those who are interested in learning for professional performances. The unit also gives a duet option where a teacher and a student can coordinate to achieve the best results. However, the automatic “dueling” found in some other higher-priced models is absent.

Despite there being some improvements over the PX150, it is reassuring to see that Casio has not overdone the complexity of the control panel. Indeed, it is now easier to use than ever before since each function has either a direct key or works with a function key combo. We found these to be quite easy to memorize and given that the product is meant for people who would not be tinkering around with too many settings, such simplicity is welcome.

Improving the convenience factor ever further is a newly introduced automatic shutdown feature. While most users were mindful of turning off the power of the piano when they had finished playing, some found it cumbersome and could count on the piano’s inbuilt controls to ensure that they did not waste electricity.

Moving beyond controls, we find that the connectivity options have been substantially improved. To begin with the in-line ports, we have two in line ports, one on each side. Neither of them interferes with the pianist or his/her trainer/co-pianist.

More interestingly, we now have a MIDI function that was absent from the PX150. This function is extremely intuitive and adapts to Windows devices with remarkable ease. In fact, one user commented that there is virtually no need to install any drivers in Windows as it automatically detects the fact that the unit is a MIDI device. Once it has been detected, recording and use of various software effects is a breeze.

Coming to the question of speakers, we find that the PX160 has significantly improved speakers. Many users said that they no longer had any need for using headphones, unless it was a question of privacy. Further, not only has the quality of speakers been improved, they have also been situated in a better manner and thus can replicate a grand performance even when the user is keeping the piano in a small room.

While it is disappointing to see that the perennial problems regarding the pedal and the harpsichord function have not been addressed, they are somewhat overshadowed by the presence of a range of excellent features that make the Casio Privia PX160 stand out from the PX150 and other competitors of its generation. From the excellent design, great speakers and excellent connectivity options to the excellent controls, keys and music quality, the core functionalities of the digital piano are such that it’d take an extremely trained pianist to find fault with them. Given that the product is aimed at those who wish to learn a digital piano or practice for small performances without incurring excessive costs or investing in learning complex and somewhat unnecessary functions, we’d say that the PX160 manages to tick virtually all the required boxes.